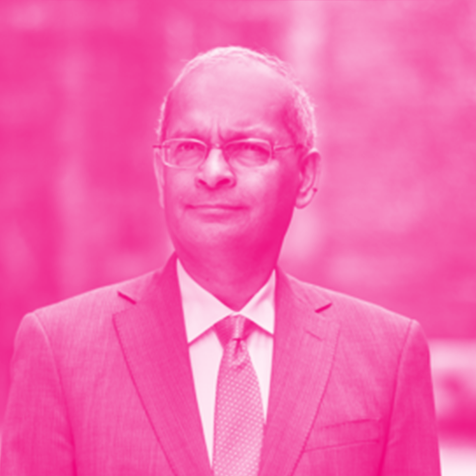 Professor Vivek Goel is Vice-President, Research and Innovation, and Strategic Initiatives at the University of Toronto and a Professor in the Institute of Health Policy, Management and Evaluation at the Dalla Lana School of Public Health. Professor Goel is a distinguished scholar with an extensive background in teaching, research and university administration. He obtained his medical degree from McGill University and completed post-graduate medical training in Community Medicine at the University of Toronto. Dr. Goel obtained an MSc in Community Health from U of T and an MS in Biostatistics from Harvard University School of Public Health. His research has focused on health services evaluation and the promotion of the use of research evidence in health decision-making.

Professor Goel joined the University of Toronto in 1991 as Assistant Professor in the Department of Preventive Medicine and Biostatistics. He was chair of the Department of Health Administration in the Faculty of Medicine from 1999 until 2001, then served as Vice-Provost, Faculty and subsequently was the University’s Vice President and Provost from 2004 until 2008. He was a founding scientist at the Institute for Clinical Evaluative Sciences (ICES), where he continues as an Adjunct Senior Scientist. He served as founding President and CEO of Public Health Ontario from 2008 until 2014, where he was highly successful in building an academic public health services agency that provided scientific and technical advice to front-line practitioners. Prior to rejoining U of T he served as Chief Academic Strategist with Coursera, a global platform that connects universities and learners with online courses.