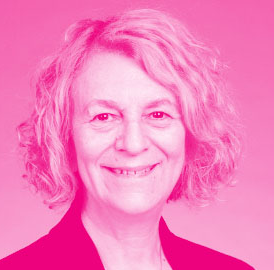 Dr. Gerri Sinclair is a managing director at Kensington Capital Partners and leader of the firm’s Vancouver office, where she serves as the manager of the $100M BC technology fund. Her cross-domain career includes more than 25 years’ experience spanning the fields of Internet, mobile, and digital media technologies, entrepreneurial business, and government policy.

She began her career as a professor at Simon Fraser University where the technology developed by her research group was spun out as an Internet startup. She then went on to become a successful high-tech entrepreneur as the founder and CEO of NCompass Labs, the digital content management company acquired by Microsoft in 2001. She joined the Microsoft senior executive team as general manager for the MSN Canada subsidiary. A former IBM Consulting Scholar as well as a visiting scientist at IBM Research in New York, she was also the first president of the British Columbia Government Premier’s Technology Council and the founding director of the ExCITE lab at Simon Fraser University, the first digital media technology R&D centre in Canada.

In 2005-2006, Gerri served as chair of the Canadian Telecom Policy Review Panel, a three-member “wise persons” panel advising the Government of Canada on the policy and regulatory environment required to support an advanced telecommunications framework. From 2006-2010, she was the founder and CEO of the Centre for Digital Media at Great Northern Way Campus, where she developed and directed an innovative graduate school program awarding a master’s degree in digital entertainment, mobile/social media, and video game design and accredited by the four leading universities in Vancouver.

Gerri has served on several government and corporate boards, including Telus Corporation, BC Telecom, and Ballard Power, as well as Canada’s Information Highway Advisory Council and the National Broadband Taskforce. In addition to being a member of the Toronto Montreal Stock Exchange Board of Directors (TMX), she is currently a director of the Vancouver Airport Authority (YVR) and serves as a senior innovation strategist at Telefonica’s Advanced Multimedia Research Lab in Barcelona, Spain.

Gerri is the recipient of many awards in business, entrepreneurship, and technology innovation, including the YWCA Woman of Distinction award, the Canadian Women in Communications Woman of the Year award, the Canadian Women in New Media Pioneer award, the Influential Woman in Business award, and the Sarah Kirke Award for the most outstanding Canadian woman in high tech. In 2005, she was honored with the Canadian Consumer Choice Award for Business Woman of the Year. In 2008, she received the Canadian Public Policy Forum Testimonial Award for her outstanding contribution to the quality of public policy and public management in Canada. She also was ranked in both 2016 and 2017 to the “Vancouver Power 50,” an annual list of the most powerful people in the city and was named one of the top Women of Influence in 2017 by BC Business Magazine and one of the top 150 Women in Canada.

Gerri holds a PhD in Renaissance Drama as well as an honorary Doctor of Science in Computing Science from the University of British Columbia.